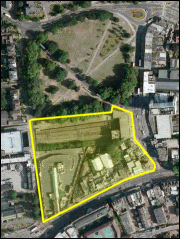 The Arcadia site lies on the southern edge of Haven Green. It includes the car park on the railway embankment and extends south to The Broadway, east to Ealing Broadway Station and west to Springbridge Road.

There have been redevelopment plans relating to the site that run back for some years.

In 2009 plans for redeveloping the Arcadia site including a block of 27 storeys that would have towered over Haven Green were rejected by the Gvernment after a public inquiry that pitched local people against developers who subsequently went bust.  The site has been acquired by Benson Elliot﻿ who have no current plans to change the Haven Green sky line.

More information on the current plans can be found on the Gazette website.

An account of what has gone on can be found on the Save Ealing's Centre website under the Arcadia heading.﻿

Friends of Haven Green﻿ are concerned that our 5 point agenda for the Green must be kept to the fore when plans for the Arcadia site are considered.  We are pressing these points in our response to a consultation by Ealing Council on its  Planning Principles for the  Site.

Alternative plans for the Arcadia Site
John Hummerston, a retired Ealing architect, has drawn up outline plans which demonstrate how the site could have a traffic-free link to Ealing Broadway station, and free the Green from buses.
Arcadia plans 2012 - JHm.pdf
Adobe Acrobat document [507.1 KB]

What the Ealing Gazette reported.