After hearing the arguments during the four-day public inquiry, planning inspector Alan Beckett, has ruled that the corner of Haven Green on which the Cycle Hub was built in 2012 should be deregistered as common land. No replacement land will be provided in compensation.

Government policy is that deregistration of common land without replacement land is permissible only in exceptional circumstances. Friends of Haven Green claimed replacement land was available in the undeveloped car park next door and there were no reasons why it could not be used. Furthermore, they said there were other equally-suitable locations for cycle parking nearby.

The inspector agreed with FoHG that LBE was wrong in claiming the cycle hub had any recreational purpose so it had therefore been erected unlawfully.  However, he thought Crossrail would increase demand for cycle parking, so there were ‘exceptional circumstances’ to justify its deregistration.

FoHG Chair Greg Phelan, says ‘LBE knew very well it needed consent to put the cycle hub on the common land. This decision rewards its high-handed decision to go ahead without first obtaining consent.  Common land is statutorily safeguarded for the enjoyment and recreation of the public.  Although 188 square metres might seem a small area, this is only a small common and the hub occupies the most prominent corner. This decision could create a precedent for other common land in the Borough. Huge development pressure and high land prices mean nowhere is safe.’

We are examining Inspector Beckett’s reasoning carefully to see whether we should be pursuing things further.

Application to Deregister the Lozenge as Common Land

A summary of FoHG's submission:

Ealing Council is applying to the Department of the Environment, Farming and Rural Affairs (DEFRA) for permission to retain structures on Haven Green Common Land that it erected without consent in 2012. These structures comprise the cycle hub lozenge and CCTV poles.

Ealing’s application is being made now because of a last resort legal action Friends of Haven Green have brought against the Council for it to respect Haven Green as Common Land that Government legislation reserves as open space for the public to enjoy.

This application is an alternative to a separate one to lose totally the Cycle Hub lozenge as Common Land (see below).  A public Inquiry will examine both cases although the previously announced date of  January 18 and 19 next year has now been postponed.

FoHG objects to both applications because we do not think the use of protected Common land for what is in effect the enlargement of the Ealing Broadway transport interchange is either lawful or morally right.  The Council has had every chance to require that cycle parking facilities be provided within Ealing Broadway station which is now being rebuilt, but it has never pushed for this.  Furthermore, if the application succeeds, it will set a precedent for Councils across the country to eat away any protected common land for any purposes they see fit just by building on it. 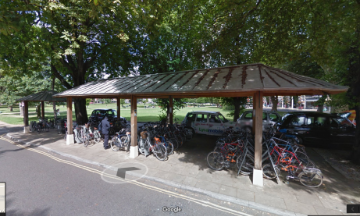 Lozenge with shelter obscuring the view of the Green

Application to Deregister the 'Lozenge' 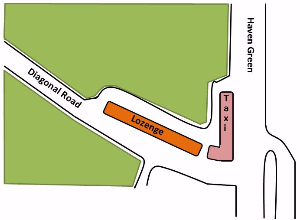 Ealing Council has applied to the Secretary of State to remove the Common land status from the lozenge of land on the diagonal road across the Green. The Council built part of the cycle hub on this land in 2012 without first obtaining permission from the Secretary of State for the Environment.  The Council argues it needs the land for the cycle hub to serve the growing numbers of passengers using Ealing Broadway Station.

FoHG strongly opposes the Council’s application. We say the shelters detract from the sense openness that is a feature of this and other Common land in London. Besides, expanding the interchange this way is against the letter and the spirit of laws designed to protect Common land as places of leisure and recreation.  The transport interchange needs to grow if it is to cater for increased passenger numbers, but it is wrong to provide this by taking over common land. With a full scale refurbishment of the station getting under way there is a great chance to put cycle parking within the station, which is being ignored. 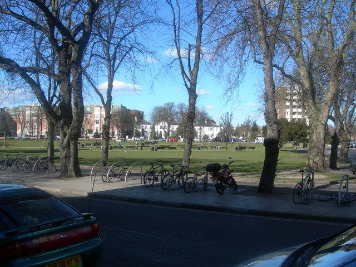 Lozenge before the shelter was erected