The planning Inspector has refused the widening of the footpath along the diagonal road because the council are not offering enough (or the right sort of) land in exchange.

He has, though, confirmed that the joint cycle/foot path from Gordon Road to the station should stay, although permission was never applied for. This was less of an issue for FoHG and the amount of land was very small.

This is not necessarily the end of the matter as the Council can appeal to the High Court against the decision.

A big thank you to those who were able to come to the PINS enquiry at the town hall today. It was great that we were able to applaud to show our support for the points raised (even if we did get told off!).

The disappointing part was that the Inspector was not able to consider past infringements when coming to a decision on the current issue; we will need to find out how we can get this addressed without incurring huge legal bills.

The encouraging part was that Ealing Council have accepted our proposed method of calculating the area of Haven Green for the purpose of measuring how much land needs to be given in exchange for the proposed widening of the diagonal; they have also accepted that the 65 lay-by can no longer be used as part of the exchange.

We wait to see what the council comes back to us with.

A big thank you also to Greg Phelan, Will French and Julian Edmonds – not just for their good performance on the day but also for the hours of preparation they have put in (did you see their indexed folders full of paperwork from which they were able to extract emails, maps etc.at a moment’s notice?)

Friends of Haven Green have been informed by the Planning Inspectorate that there will be a hearing into our appeal against the encroachment on the Haven Green Common Land.

"Having considered the applications and all the correspondence relating to them, we have decided that the applications should be determined by way of a hearing.  A PINS Inspector will hold a hearing into the applications starting at 10.00am on Thursday 25 September 2014.  It will be held at Queen’s Hall, Ealing Town Hall, New Broadway, London W5 2BY. "

Friends of Haven Green are delighted that we and other community groups will be able to stand up and be heard.

Freinds of Haven Green Appeal to the Planning Inspectorate

In August 2013 Ealing Council applied to the Planning Inspectorate for permission, amongst other things, to widen the footpath on the diagonal road across Haven Green. In return, they were planning to compensate with land from the 65 bus stand (near the roundabout) which was to be returned to common land.

Friends of Haven Green have objected for the following main reasons:

As of May 2014 we are awaiting the decision of the planning inspectorate; we hope that an inspector will be appointed to hold an inquiry.

Time to get serious 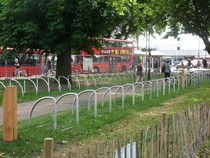 One of FoHG’s aims is to protect Haven Green as an anciet area of Common Land in the heart of Ealing.

We have grown increasingly concerned about the way that bits of the Common Land have been built on. Despite laws that are designed to protect our Common Land for future generations, Haven Green is being nibbled away and precious areas of grass have been taken for bus stops, an electricity sub station and the new cycle hub.

The encroachment process seems to be accelerating. This year an additional row of 110 cycle stands has been installed for still more cycle parking. This added to all the unsightly clutter around the station area - the first thing that passengers see when they arrive by train into Ealing.

How much further will this process continue? Is all of Haven Green to be lost? FoHG has tried unsuccessfully to discuss with the Council what the future holds. Despite numerous requests by the Friends of Haven Green and other groups, the Council consulted nobody about this latest encroachment.

Legal advice has been clear that Common Land cannot be built on or paved over without Government approval and it may not be taken unless equivalent area is provided. FoHG is asking the Council to justify the grounds on which it took this and other land that has been lost from the Green.

Government advice is that the best way to address such matters is by discussing them with local interest groups, including FoHG. We agree. However, if we cannot have such a discussion the only alternative is for us to apply to the County Court for the removal of all unlawful encroachments and the restoration of the common land.   We hope that this will not be necessary.

Previous Posts on this topic

Why are the temporary cycle racks still on Haven Green - and being made permanent?

Friends of Haven Green did not object to the temporary cycle racks on Haven Green while the new cycle hub was being built - BUT WHY ARE THEY STILL THERE?

Not only are they still there but they are being made permanent ON COMMON LAND.

This is yet another encroachment on this public open space.

Friends of Haven Green support the council in providing sufficient cycle spaces as are necessary as this will help to reduce motor transport in this congested area. However there are more suitable places - like the Spring Bridge Road car park?

We think they should be removed NOW

Friends of Haven Green talk to the Gazette 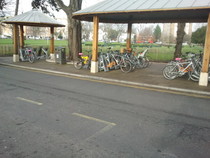 This is a picture of the cycle hub taken on 16th January 2013 showing empty spaces.

Why, then do we need more empty cycle racks on the common land which is Haven Green.

Friends of Haven Green believe they should be removed with all haste. 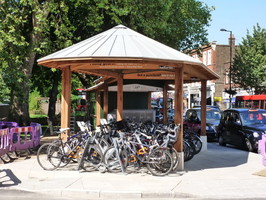 The new Cycle Hub is in place

Friends of Haven Green have concerns that cyclists will be tempted to use footpaths across Haven Green to access the hub, increasing the risks to pedestrians and other users of the Green.

Ward funds are allocated to improve the Green

£20,000 of Ward funds has been allocated to the cycle hub project to enable much-needed work to be undertaken.

The work will take place on the south-east corner where the current contractor's compound is sited and where the ice rink was previously sited.  This corner has been in poor condition for many years and it is hoped that the work will bring the grass back to its former condition.

Redevelopment of the south-east corner of Haven Green including the re-alignment of the existing pedestrian islands, to provide four free-standing shelters incorporating a taxi office and integrated cycle parking (following demolition of the existing timber taxi shelter (Deemed Consent﻿)﻿